With a view to encourage children for keener participation in various school activities and fostering in them a competitive spirit with belongingness, the school has been divided into four kuls namely Kabir, Meera, Nanak & Vivekanand. And subsequently each kul has been divided further under tutorial system so that each child is taken care of.

To inculcate a sense of responsibility and leadership among the students, a Student Council has been formed.

The students of the school are allotted to one of the four Kuls’, i.e., Kabir, Meera, Nanak & Vivekanand. The Kul pranali is an integral part of public schools and helps to co-ordinate various activities in the corporate life and leads to the building up of esprit de corps and camaraderie of a lasting nature among students. Each kul is placed under a kul incharge, who is directly responsible for the discipline and general well being of the members of the kul.

They are assisted in their tasks by a team of tutors. Regular Inter- kul competitions are held throughout the year in various co-curricular and extra-curricular activities which foster healthy competitive spirit. The Kul vies with one another to keep the kul flag aloft and win the coveted Uttam Kul trophy.

The four Kuls’ are as follows:- 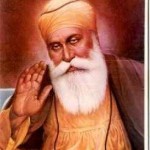 Guru Nanak (15 November 1469 – 22 September 1539) was the founder of the religion of Sikhism and the first of ten Sikh Gurus. Sikhs believe that all subsequent Gurus possessed Guru Nanak’s divinity and religious authority.

Guru Nanak’s teachings can be found in the Sikh scripture Guru Granth Sahib, a vast collection of revelatory verses recorded in Gurmukhi.

Guru Nanak describes the dangers of the Egotism (haumai- ‘I am’) and calls upon devotees to engage in worship through the word of God (Naam — It implies God, the Reality, mystical word or formula to recite or meditate upon (shabad in Gurbani), divine order (hukam) and at places divine teacher (guru) and guru’s instructions)[15] and singing of God’s qualities, discarding doubt in the process. However, such worship must be selfless (sewa). The word of God, cleanses the individual to make such worship possible. Through popular tradition, Guru Nanak’s teaching is understood to be practiced in three ways: 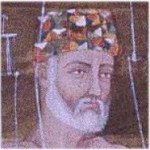 Kabir (also Kabira) (1440—1518)[1] was a mystic poet and saint of India, whose writings have greatly influenced the Bhakti movement.[2]. The name Kabir comes from Arabic Al-Kabir which means ‘The Great’ – the 37th Name of God in the Qur’an.

[Give so much, O God, suffice to envelop my clan
I should not suffer cravings, nor the visitor go unfed]

Apart from having an important influence on Sikhism, Kabir’s legacy is today carried forward by the Kabir Panth (“Path of Kabir”), a religious community that recognizes him as its founder and is one of the Sant Mat sects. Its members, known as Kabir panthis.

The basic religious principles he espoused are simple. According to Kabir, all life is an interplay of two spiritual principles. One is the personal soul (Jivatma) and the other is God (Paramatma). It is Kabir’s view that salvation is the process of bringing these two divine principles into union.

His greatest work is the Bijak (the “Seedling”), an idea of the fundamental one. This collection of poems elucidates Kabir’s universal view of spirituality. Though his vocabulary is replete with Hindu spiritual concepts, such as Brahman, karma and reincarnation, he vehemently opposed dogmas, both in Hinduism and in Islam. His Hindi was a vernacular, straightforward kind, much like his philosophies. He often advocated leaving aside the Qur’an and Vedas and simply following Sahajapath, or the Simple/Natural Way to oneness in God. 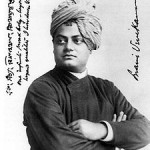 Swami Vivekananda (Bengali: Shami Bibekanondo) (January 12, 1863–July 4, 1902), born Narendranath Dutta was the chief disciple of the 19th century mystic Sri Ramakrishna Paramahamsaand the founder of Ramakrishna Mission.He is considered a key figure in the introduction of Hindu philosophies of Vedanta and Yoga in Europe and America and is also credited with raising interfaith awareness, bringing Hinduism to the status of a world religion during the end of the 19th century.

“Where can we go to find God if we cannot see Him in our own hearts and in every living being.”

Vivekananda believed that the essence of Hinduism was best expressed in the Vedanta philosophy, based on the interpretation of Adi shankara. He summarised the Vedanta’s teachings as follows:-

According to Vivekananda, an important teaching he received from Ramakrishna was that “Jiva is Shiva” (each individual is divinity itself). This became his Mantra, and he coined the concept of daridra narayana seva – the service of God in and through (poor) human beings. 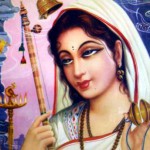 Mirabai (c.1498-c.1547, Meera; Mira; Meera Bai) was an aristocratic Hindu mystical singer and devotee of Krishnafrom Rajasthan and one of the most significant figures of the Sant tradition of the Vaishnava bhakti movement. Some 12-1300 prayerful songs or bhajans attributed to her are popular throughout India and have been published in several translations worldwide. In the bhakti tradition, they are in passionate praise of Krishna.

“My mission in life is to help humanity return home to God, raise the consciousness of the planet, and so bring liberation and world peace.”

Bhakti Yoga, the Path of Union with God through Devotion

This is the most direct path to God, the most direct path to union with the Self. Bhakti means devotion, and devotion takes place in the heart. When the heart unifies with god, then the being comes home. The being can only unify with God when the mind is totally pure. The path of Bhakti Yoga is a path of purifying the mind. At the other talks we have spoken about karma yoga or service. Reaching union with the self or the Divine happens through service. Work as worship and practising our daily activity as worship to God, so that every action that we take is surrendered to God.